The sun rises behind Mount Baker as seen from the top of
Mount Constitution on Orcas Island. Captured with a Canon
EOS-3 and the Canon EF 20-70/2.8L lens on Fujichrome Velvia 50.
.....
During this visit to the San Juan Islands I was staying in a
Bed and Breakfast in Eastsound, the largest population center
on Orcas Island. I made the drive up to the top of Mount
Constitution before sunrise, but the gate was closed so I
had to wait until the park ranger opened it right at sunrise.
When I arrived at the summit I saw this scene and scrambled to
quickly get my equipment set up on my tripod before the sun
was too high in the sky.
.....
Mount Constitution is a mountain on Orcas Island, and the
highest point in the San Juan Islands. A stone observation
tower patterned after a medieval watch tower stands at the
summit. It was built by the Civilian Conservation Corps in 1936.
The tower offers panoramic views of the surrounding islands,
the Cascade Mountains, and many Canadian and American cities.
On a clear day, the view encompasses locations as diverse as
Mount Baker, Mount Rainier, Saturna Island, and the cities
of Vancouver, and Victoria, British Columbia. Mount Constitution
lies within the 5,000 acres (20.2 km2) Moran State Park.
The prominence was named by Charles Wilkes during the Wilkes
Expedition of 1838-1842 for the USS Constitution. 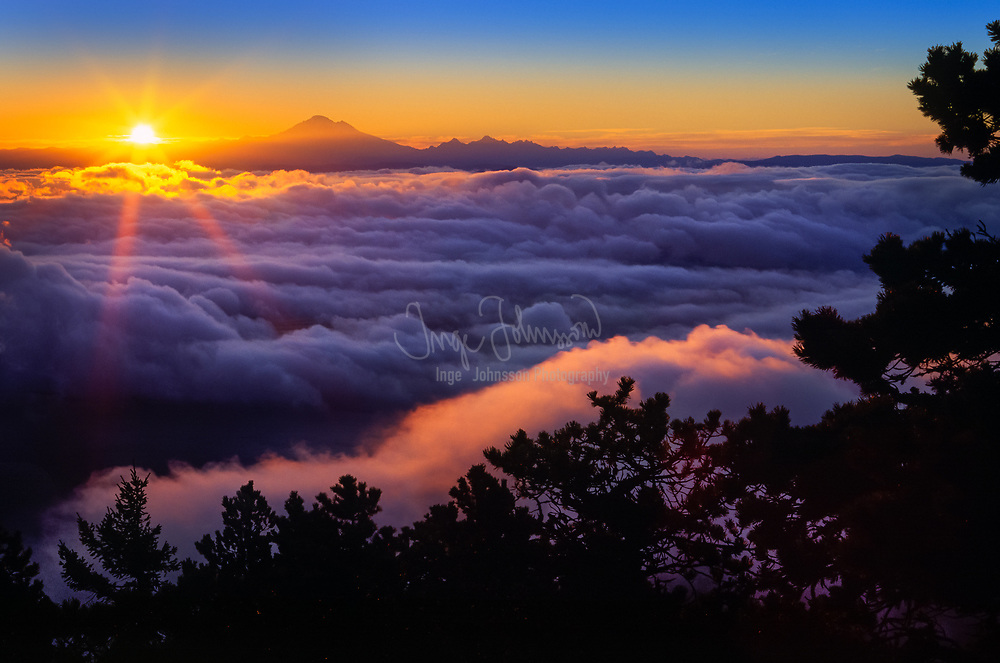