The Fort Worth Water Gardens, built in 1974, is located on the south end of downtown Fort Worth between Houston and Commerce Streets next to the Fort Worth Convention Center. The 4.3 acre (1.7 hectare) Water Gardens were designed by noted New York architects Philip Johnson and John Burgee and were dedicated to the City of Fort Worth by the Amon G. Carter Foundation.
The urban park is frequently billed as a "cooling oasis in the concrete jungle" of downtown. Its focal points are three pools of water and a terraced knoll, which helps to shield the park from adjacent Interstate 30. The quiet meditation pool is encircled with trees and features a flat, still plane of water that cascades almost 90 degrees down to a sunken walkway. The aerating pool features multiple spray fountains. The main attraction of the Water Gardens is the active pool which has water cascading 38 feet (11 m) down terraces and steps into a small pool at the bottom. The park also contains over 500 species of plants and trees.
The active pool was originally built for people to be able to walk down the terraced steps and experience the water tumbling around them. It was temporarily closed to the public after four people died there on June 16, 2004. Three children and one adult drowned after one of the children fell in the pool. The water was unusually deep due to a recirculating pump malfunction and heavy rains. The park was reopened on March 4, 2007 after being made safer by reducing the depth of the main pool from 9 ft (2.7 m) to 2 ft (0.61 m). 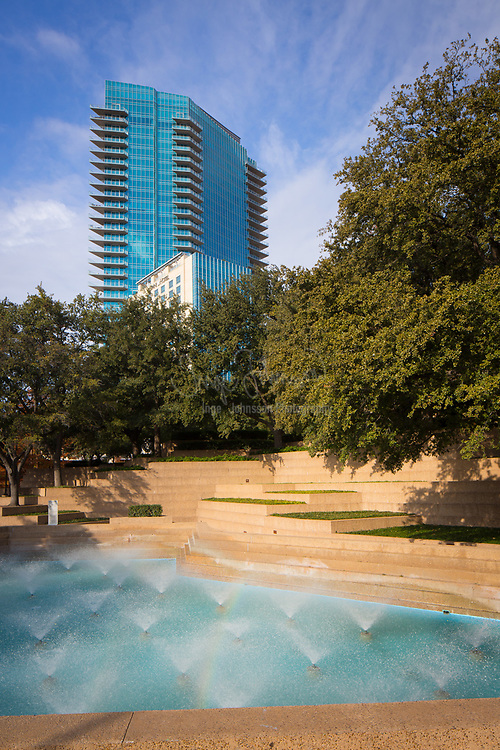