The Jantar Mantar is a collection of architectural astronomical instruments, built by Sawai Jai Singh who was a Rajput king served Emperor Aurangzeb and later Mughals. The title of (King) and Sawai was bestowed on him by Emperor Mohammad Shah. Jai Singh II of Amber built his new capital of Jaipur between 1727 and 1734. It is also located in Ujjain and Mathura. It is modeled after the one that he had built at the Mughal capital of Delhi. He had constructed a total of five such facilities at different locations, including the ones at Delhi and Jaipur. The Jaipur observatory is the largest and best preserved of these. It has been inscribed on the World Heritage List as "an expression of the astronomical skills and cosmological concepts of the court of a scholarly prince at the end of the Mughal period". Early restoration work was undertaken under the supervision of Major Arthur Garrett, a keen amateur astronomer, during his appointment as Assistant State Engineer for the Jaipur District. The jantar mantar was made by sawai jai singh as he was particularly interested in learning about the sky above his head. The observatory consists of fourteen major geometric devices for measuring time, predicting eclipses, tracking stars' location as the earth orbits around the sun, ascertaining the declinations of planets, and determining the celestial altitudes and related ephemerides. Each is a fixed and 'focused' tool. The Samrat Yantra, the largest instrument, is 90 feet (27 m) high, its shadow carefully plotted to tell the time of day. Its face is angled at 27 degrees, the latitude of Jaipur. The Hindu chhatri (small cupola) on top is used as a platform for announcing eclipses and the arrival of monsoons.
Built from local stone and marble, each instrument carries an astronomical scale, generally marked on the marble inner lining. Bronze tablets, all extraordinarily accurate, were also employed. Thoroughly restored in 1901, the Jantar Mantar was declared a national monument in 19 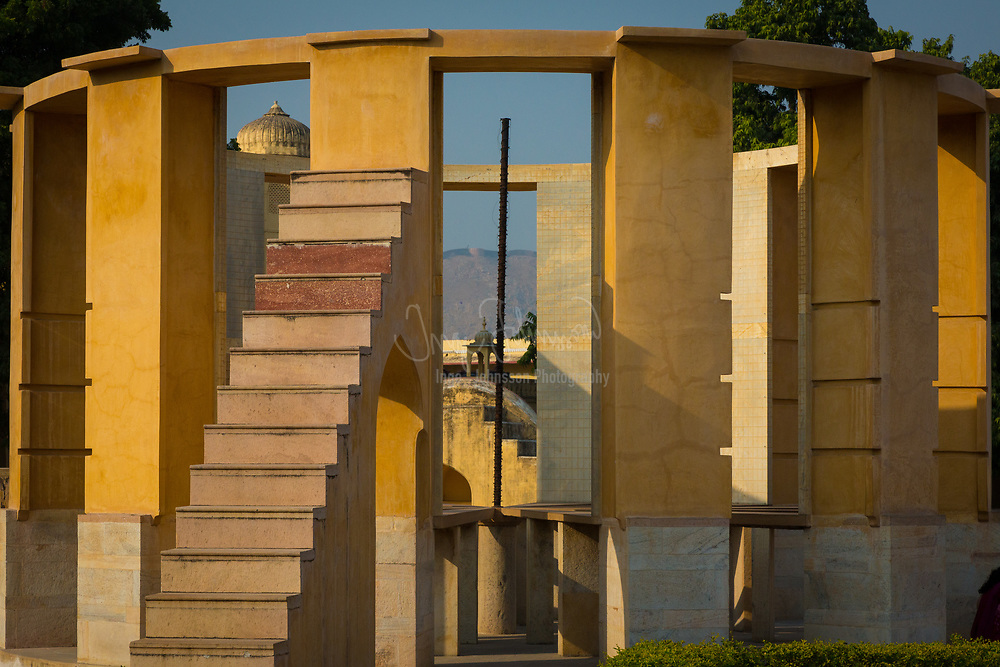