Death Valley is a desert valley located in Eastern California. Situated within the Mojave Desert, it is the lowest and driest area in North America.

Badwater is a salt flat that is beneath the face of the Black Mountains that contains the lowest elevation in North America at 86 meters below sea level. The massive expanse of white is made up of almost pure table salt. This pan was first created by the drying-up of 30-foot deep Recent Lake 2000 to 3000 years ago. Unlike at the Devils Golf Course, significant rainstorms flood Badwater, covering the salt pan with a thin sheet of standing water. Each newly formed lake doesn't last long though, because the 1.9 inch average rainfall is overwhelmed by a 150-inch annual evaporation rate. This, the nation's greatest evaporation potential, means that even a 12-foot deep, 30 mile long lake would dry up in a single year. While flooded, some of the salt is dissolved, then is redeposited as clean, sparkling crystals when the water evaporates.

Located near the border of California and Nevada, in the Great Basin, east of the Sierra Nevada mountains, Death Valley constitutes much of Death Valley National Park and is the principal feature of the Mojave and Colorado Deserts Biosphere Reserve. It is located mostly in Inyo County, California. It runs from north to south between the Amargosa Range on the east and the Panamint Range on the west; the Sylvania Mountains and the Owlshead Mountains form its northern and southern boundaries, respectively. 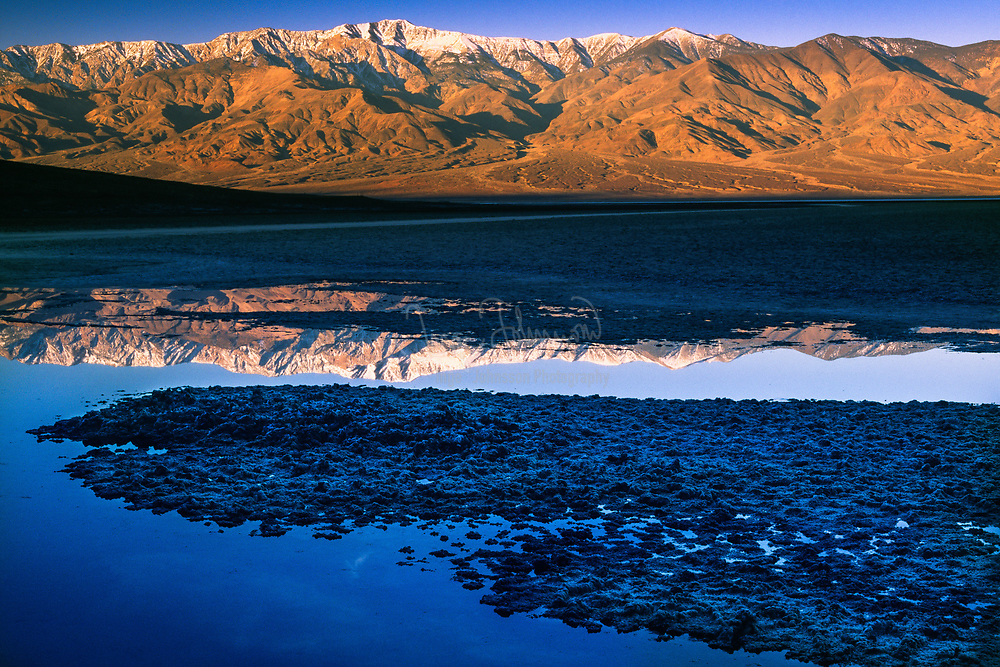