The river Arno and Ponte Vecchio bridge in Firenze (Florence), Italy.
-----
Captured with a Canon 5D Mk III camera and Canon EF 24-105/4L IS lens
-----
Florence (Italian: Firenze) is the capital city of the Italian region of Tuscany and of the province of Florence. The Ponte Vecchio ("Old Bridge") is a Medieval stone closed-spandrel segmental arch bridge over the Arno River, in Florence, Italy, noted for still having shops built along it, as was once common. Butchers initially occupied the shops; the present tenants are jewellers, art dealers and souvenir sellers. The Ponte Vecchio's two neighbouring bridges are the Ponte Santa Trinita and the Ponte alle Grazie. The bridge spans the Arno at its narrowest point where it is believed that a bridge was first built in Roman times, when the via Cassia crossed the river at this point. The Roman piers were of stone, the superstructure of wood. The bridge first appears in a document of 996. After being destroyed by a flood in 1117 it was reconstructed in stone but swept away again in 1333 save two of its central piers, as noted by Giovanni Villani in his Nuova Cronica. It was rebuilt in 1345, Giorgio Vasari recorded the tradition in his day, that attributed its design to Taddeo Gaddi, besides Giotto one of the few artistic names of the trecento still recalled two hundred years later. Modern historians present Neri di Fioravanti as a possible candidate. Sheltered in a little loggia at the central opening of the bridge is a weathered dedication stone, which once read Nel trentatrè dopo il mille-trecento, il ponte cadde, per diluvio dell' acque: poi dieci anni, come al Comun piacque, rifatto fu con questo adornamento. The Torre dei Mannelli was built at the southeast corner of the bridge to defend it.
The bridge consists of three segmental arches: the main arch has a span of 30 meters (98 ft) the two side arches each span 27 meters (88 ft). The rise of the arches is between 3.5 and 4.4 meters (11½ to 14½ feet), and the spa 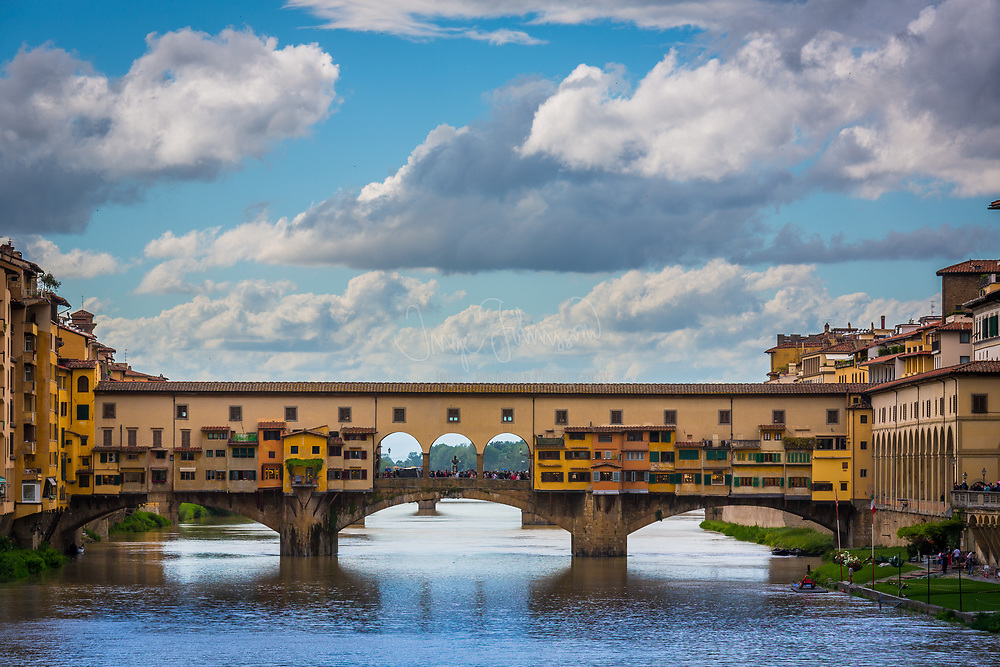