The springbok (Antidorcas marsupialis) is a medium-sized antelope found mainly in southern and southwestern Africa. The sole member of the genus Antidorcas, this bovid was first described by the German zoologist Eberhard August Wilhelm von Zimmermann in 1780. Three subspecies are identified. A slender, long-legged antelope, the springbok reaches 71 to 86 cm (28 to 34 in) at the shoulder and weighs between 27 and 42 kg (60 and 93 lb). Both sexes have a pair of black, 35-to-50-centimetre (14 to 20 in) long horns that curve backward. The springbok is characterised by a white face, a dark stripe running from the eyes to the mouth, a light brown coat marked by a reddish brown stripe that runs from the upper foreleg to the buttocks across the flanks, and a white rump flap.

Active mainly at dawn and dusk, springbok form harems (mixed-sex herds). In earlier times, springbok of the Kalahari desert and Karoo would migrate in large numbers across the countryside, a practice known as trekbokken. A feature unique to the springbok is pronking, in which the springbok performs multiple leaps into the air, up to 2 metres (6.6 ft) above the ground, in a stiff-legged posture, with the back bowed and the white flap lifted. Primarily a browser, the springbok feeds on shrubs and succulents; this antelope can live without drinking water for years, meeting its requirements through eating succulent vegetation. Breeding takes place year-round, and peaks in the rainy season, when forage is most abundant. A single calf is born after a five to six month long pregnancy; weaning occurs at nearly six months of age, and the calf leaves its mother a few months later. 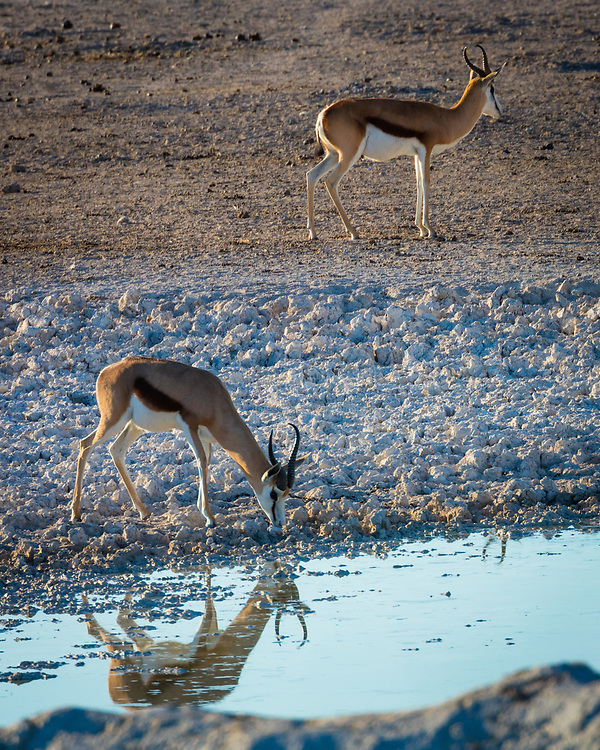